Herculaneum, After the Hero Hercules

Herculaneum, named after the hero Hercules, was a small town in Campania on the west coast of central Italy, located some 8km south-east of present-day Naples.
Boasting only a small harbour, its main advantages were its excellent climate and its seaside position. It grew into a holiday resort and luxurious retreat for the wealthy landowners who built and bought estates there. The largest villa, the so-called Villa of the Papyri, is widely believed to have been owned by Julius Caesar’s father-in-law, L. Calpurnius Piso Caesoninus. The origins of Herculaneum are unclear: the name and the regularity of the urban planning suggest that it may have been connected with the Greek settlement at Naples, but the recorded languages used in the town are Oscan and then Latin, both native Italic languages. As elsewhere in southern Italy, an originally Greek foundation may have become ‘Italicised’ through conquest or assimilation. In the fourth century BC Herculaneum was a member of the Samnite league but was later allied to Rome, although it sided with the Italian allies in the Social War of 91-87 BC.

Mount Vesuvius Latin: Mons Vesuvius [mõːs wɛˈsʊwɪ.ʊs]; also Vesevus or Vesaevus in some Roman sources)[] is a somma-stratovolcano located on the Gulf of Naples in Campania, Italy, about 9 km (5.6 mi) east of Naples and a short distance from the shore. It is one of several volcanoes which form the Campanian volcanic arc. Vesuvius consists of a large cone partially encircled by the steep rim of a summit caldera caused by the collapse of an earlier and originally much higher structure.
Mount Vesuvius is best known for its eruption in AD 79 that led to the burying and destruction of the Roman cities of Pompeii and Herculaneum, as well as several other settlements. The eruption ejected a cloud of stones, ashes and volcanic gases to a height of 33 km (21 mi), spewing molten rock and pulverized pumice at the rate of 6×105 cubic metres (7.8×10 cu yd) per second ultimately releasing a hundred thousand times the thermal energy released by the Hiroshima-Nagasaki bombings More than 1,000 people died in the eruption, but exact numbers are unknown. The only surviving eyewitness account of the event consists of two letters by Pliny the Younger to the historian Tacitus
Vesuvius has erupted many times since and is the only volcano on the European mainland to have erupted within the last hundred years. Today, it is regarded as one of the most dangerous volcanoes in the world because of the population of 3,000,000 people living nearby and its tendency towards violent, explosive eruptions of the Plinian type, making it the most densely populated volcanic region in the world

Oplontis was an ancient Roman site near Pompeii in Italy. It is best known today for the sumptuous Roman Villa Poppaea which is open to visitors. As with other Roman sites in the area, such as Herculaneum and other villas, the eruption of Mount Vesuvius buried it under a deep layer of ash on August 24, AD 79.
The name “Oplontis” most likely referred originally to the baths in the area of Campo Oncino, but today the name commonly covers the group of villas in the middle of the modern town of Torre Annunziata (Torre Nunziata in the local Neapolitan dialect).
The villa was excavated in the mid-20th century up to 1984 and is associated with Poppaea, the second wife of Emperor Nero
A second villa, the Villa of L. Crassius Tertius, was discovered in 1974, 300 metres east of the Villa Poppaea  during the construction of a school. A bronze seal bearing Crassius’ name was found at the site.
A large number of artifacts from Oplontis are preserved in the Naples National Archaeological Museum. 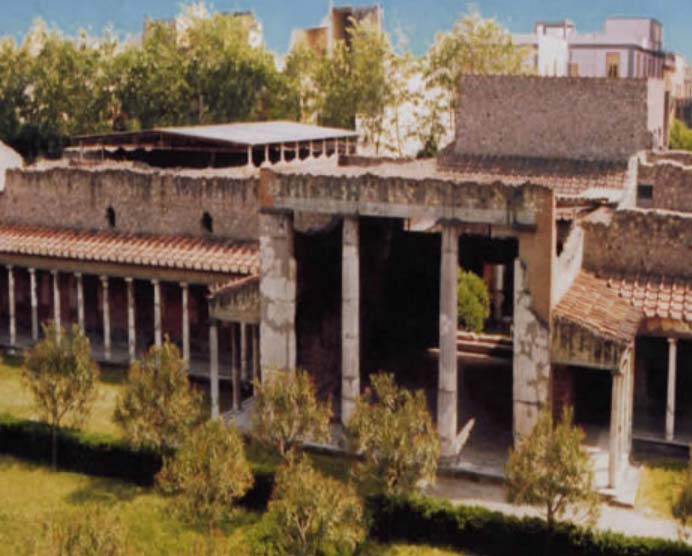 Situated on the small bay of Capo Conca, the "Grotta dello Smeraldo" is considered the Eighth Wonder of the world. It is an emerald green temple, rich in stalagmites and stalactites that create fantastic shapes. There is also a beautiful submerged Nativity made in...

The Cathedral was founded in 1086 and eventually transformed in the 18th century. The bell tower is still original in a magnificent Norman/Arab style. There are two extremely important bronze doors at the entrance which were cast in 1179. The nave has a superb mosaic...

Positano is nestled in the heart of the Amalfi Drive, located where the Sorrentine Peninsula bends towards the South becoming the Gulf of Salerno. In the middle of this panoramic bay lie the Islands of Li Galli, formerly called the "Island of the Sirens" in...

Pompeii, buried in cinder in 79 AD in one of the most disastrous volcanic eruptions, provides first class evidence of the way of life in a Roman city at the time of the Empire. The site, located in an attractive setting, is huge and there is a lot to see. Among the...

Paestum is one of the most important archeological sites of Italy. It was founded around 600 BC by Greek colonists from Sibari, under the name of Poseidonia. The museum includes the famous Methopes, low reliefs in the Doric style of the 6th century BC, which formed...

Naples is one of the oldest continuously inhabited cities in the world. Bronze Age Greek settlements were established in the Naples area in the second millennium BC. A larger colony – initially known as Parthenope, Παρθενόπη – developed on the Island of...

Discovering the wonders through the Campi Flegrei: The Cave At Cumae, Flavian Amphitheater, The Macellum of Pozzuoli Temple of Serapis and the sunken City of Baia.

Atrani is a small village built in the valley formed by the river Dragone’s delta. The top of Mount Aureo, with the beautiful Tower of Zirro, used to survey the coastline from the Saracens’s attacks in the Middle Ages, is the bordering line between the two villages....

Amalfi was the first born among the Four Maritime Republics and reached its maximum splendour during the 10th and 11th centuries, with merchant colonies in the main harbours of the Mediterranean Sea: Byzantium, Alexandria, Beirut, Cyprus. The Maritime Laws of the...

Sorrento (In Neapolitan: Surriento) is a town overlooking the Bay of Naples in Southern Italy. A popular tourist destination, it can be reached easily from Naples and Pompeii as it is at the south-eastern end of the Circumvesuviana rail line. The Sorrentine...

— Umbria: expect the unexpected Everchanging, untouched landscapes in the green of winding valleys make Umbria a region that will never fail to amaze. This region comprises mainly hills, mountains, hollows and plains and extends along the Tiber’s central basin. and it...