Discovering the wonders through the Campi Flegrei.

The Cumaean Sibyl was the priestess presiding over the Apollonian oracle at Cumae, a Greek colony located near Naples, Italy. The word sibyl comes (via Latin) from the ancient Greek word sibylla, meaning prophetess. There were many sibyls in different locations throughout the ancient world. Because of the importance of the Cumaean Sibyl in the legends of early Rome as codified in Virgil’s Aeneid VI, and because of her proximity to Rome, the Cumaean Sibyl became the most famous among the Romans. The Erythraean Sibyl from modern-day Turkey was famed among Greeks, as was the oldest Hellenic oracle, the Sibyl of Dodona, possibly dating to the second millennium BC according to Herodotus, favored in the east. The famous cave known as the “Antro della Sibilla” was discovered by Amedeo Maiuri in 1932, the identification of which he based on the description by Virgil in the 6th book of the Aeneid, and also from the description by an anonymous author known as pseudo-Justin.(Virg. Aen. 6. 45–99; Ps-Justin, 37). The cave is a trapezoidal passage over 131 m long, running parallel to the side of the hill and cut out of the volcanic tuff stone and leads to an innermost chamber, where the Sibyl was thought to have prophesied.

The Flavian Amphitheater , located in Pozzuoli, is the third largest Roman amphitheater in Italy. Only the Roman Colosseum and the Capuan Amphitheater are larger. It was likely built by the same architects who previously constructed the Roman Colosseum. The name Flavian Amphitheater is primarily associated with the Roman Colosseum. It was begun under the reign of the emperor Vespasian and probably finished under the reign of his son Titus. The arena can hold up to 20,000 spectators. The interior is mostly intact and one can still see parts of gears which were used to lift cages up to the arena floor.
In 305, the arena was the setting for the persecutions of the patron of Pozzuoli, Saint Proculus, and the patron saint of Naples, Saint Januarius. After surviving being thrown to the wild beasts in the arena, the two were beheaded at the nearby Solfatara. The modern highly technological equipment of the cellar was completed by the beginning of 2005. It is set in the ancient estate belonging to the Di Palma Family, the actual producers, who avail of the expert professional advice of dr. Carmine Valentino from Avellino.

— The Macellum of Pozzuoli Temple of Serapis

The Macellum of Pozzuoli : Macellum di Pozzuoli) was the macellum or market building of the Roman colony of Puteoli Puteoli now the city of Pozzuoli in southern Italy. When first excavated in the 18th century, the discovery of a statue of Serapis led to the building being misidentified as the city’s serapeum or Temple of Serapis. A band of borings or Gastrochaenolites left by marine Lithophaga bivalve molluscs on three standing marble columns indicated that these columns had remained upright over centuries while the site sank below sea level, then re-emerged. This puzzling feature was the subject of debate in early geology, and eventually led to the identification of bradyseism in the area, showing that the Earth’s crust could be subject to gradual movement without destructive earthquakes. 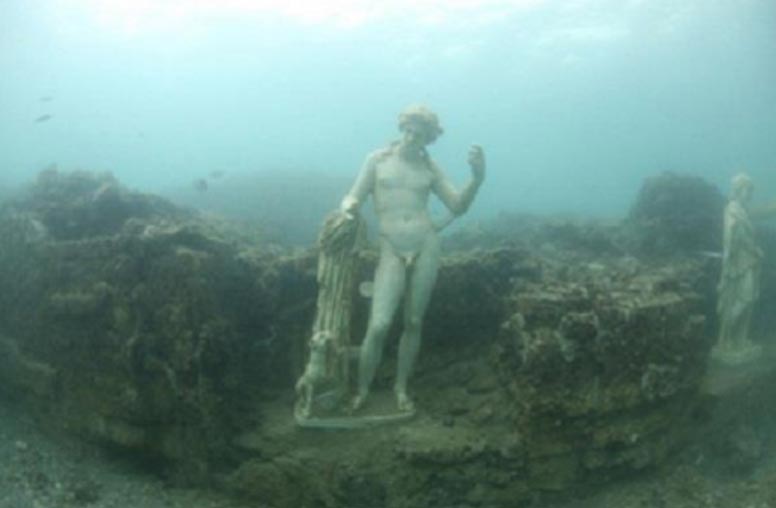 — The sunken city of Baia

In its heyday, the Classical Roman city of Baia was the hedonist Las Vegas of the time, but now its remains are partying beneath the waves.
A prominent resort city for centuries, Baia catered to the recreational whims of the rich and powerful among the Roman elite. The city, which was located over natural volcanic vents, was famous for its healing medicinal hot springs which occurred all around the city and were quite easy to build spas over. Some of antiquity’s most powerful figures such as Nero, Cicero, and Caesar were known to have visited the city and a number of them actually built permanent vacation villas there.  Today the ancient remains of Baia can be visited in one of the world’s few underwater archeological parks. Visitors can view the crumbled structures and amazingly preserved statuary of the city through glass-bottomed boats, snorkeling, or even scuba dives which allow people to actually swim amongst the copious ruins. While the city is no longer a resort, its waters still hold wonders.

Situated on the small bay of Capo Conca, the "Grotta dello Smeraldo" is considered the Eighth Wonder of the world. It is an emerald green temple, rich in stalagmites and stalactites that create fantastic shapes. There is also a beautiful submerged Nativity made in...

The Cathedral was founded in 1086 and eventually transformed in the 18th century. The bell tower is still original in a magnificent Norman/Arab style. There are two extremely important bronze doors at the entrance which were cast in 1179. The nave has a superb mosaic...

Positano is nestled in the heart of the Amalfi Drive, located where the Sorrentine Peninsula bends towards the South becoming the Gulf of Salerno. In the middle of this panoramic bay lie the Islands of Li Galli, formerly called the "Island of the Sirens" in...

Pompeii, buried in cinder in 79 AD in one of the most disastrous volcanic eruptions, provides first class evidence of the way of life in a Roman city at the time of the Empire. The site, located in an attractive setting, is huge and there is a lot to see. Among the...

Paestum is one of the most important archeological sites of Italy. It was founded around 600 BC by Greek colonists from Sibari, under the name of Poseidonia. The museum includes the famous Methopes, low reliefs in the Doric style of the 6th century BC, which formed...

Naples is one of the oldest continuously inhabited cities in the world. Bronze Age Greek settlements were established in the Naples area in the second millennium BC. A larger colony – initially known as Parthenope, Παρθενόπη – developed on the Island of...

Herculaneum, Mount Vesuvius and Oplonti — Herculaneum Herculaneum, named after the hero Hercules, was a small town in Campania on the west coast of central Italy, located some 8km south-east of present-day Naples. Boasting only a small harbour, its main advantages...

Atrani is a small village built in the valley formed by the river Dragone’s delta. The top of Mount Aureo, with the beautiful Tower of Zirro, used to survey the coastline from the Saracens’s attacks in the Middle Ages, is the bordering line between the two villages....

Amalfi was the first born among the Four Maritime Republics and reached its maximum splendour during the 10th and 11th centuries, with merchant colonies in the main harbours of the Mediterranean Sea: Byzantium, Alexandria, Beirut, Cyprus. The Maritime Laws of the...

Sorrento (In Neapolitan: Surriento) is a town overlooking the Bay of Naples in Southern Italy. A popular tourist destination, it can be reached easily from Naples and Pompeii as it is at the south-eastern end of the Circumvesuviana rail line. The Sorrentine...

— Umbria: expect the unexpected Everchanging, untouched landscapes in the green of winding valleys make Umbria a region that will never fail to amaze. This region comprises mainly hills, mountains, hollows and plains and extends along the Tiber’s central basin. and it...